Lindsay Janice: Life's Paparazzi
“Not all those who Wander are lost.”

A famous quote from J.R.R. Tolkien and his Lord of the Rings series, and my favorite quote of all time.  Not just because I’m a nerd, because I totally am, but because of the meaning behind it, and how it impacted my life in helping me become the person I am today.  Because of this, it’s also become the focal point of my business, Wanderer Lindsay Photography.
Story Time
Between 2010 and 2016, which was my junior year of high school and my first year out of college, my mind was reeling with trying to discover myself.  The most important part about those years though, was the amount of influence from the outside that I received about how to live my life, and how badly I cared about impressing people.

By the summer of 2015, I had graduated from college, had a job with “lots of potential,” and started living in an apartment with my other half.
Life Couldn't Have Been Better, Right?
But there was a problem: I felt empty.  The thing is, we thrive best when meeting our own true needs and desires; and over time, I realized that I was doing the exact opposite.  I continued to work to impress others, and take pride in receiving compliments as that was my only confidence in myself.  I listened to almost ALL outside influence in the form of “you should do it this way,” “people do this instead,” and “this is how it is in society.”

My job at work at the same time was also becoming downright miserable.  It only took six months to discover the company’s true nature and management, and it was like Dorothy in Wizard of Oz going from monochromatic Kansas to a vibrant Oz, but in reverse.
Every Aspect of My Life Was a Mess Fall of 2016
I hit the panic button, and the monster of stress and anxiety had its nasty fingers gripped around me, and it just squeezed.
Panic attacks.  Barely eating.  Barely sleeping.  All joy in activities and hobbies, lost.  Spending money to try and feel “happy.”  Trying to ignore the thoughts of harming myself.  I desperately wished for an escape, so I shared my situation with others, but was told I was being over dramatic and not trying hard enough.  Thus, I felt alone and even ashamed for feeling all of it.

One day though, I rediscovered that quote by J.R.R. Tolkien:
"Not All those who wander are lost."
That’s when it hit me.  Life is about the journey, not the destination.  It’s about enjoying the ride, not hitting every checkpoint, or goal after goal after goal.  And, it’s about MY journey, because I’m the one taking it; not those with the influence that so grotesquely affected six years of my life.  I am a Wanderer of Life, and I am to embrace the present and little moments before they pass, and do what makes ME feel accomplished.

So I picked up my camera, because the best way for me to start noticing the little things was to take pictures of them.  It made me stop, slow down, observe all minute details with my five senses.  It was therapy, and life was getting better.  A few months later, I had another thought: “If these photos help me get through my own anxiety and negative life situations, I can help others who are also in their worst of times.”

Enter Wanderer Lindsay Photography
Wanderer Lindsay Photography is about being our true selves as a Wanderer of Life, with the focus on the journey, not the destination.  We are against what I call the Dark Monster that tries to hinder that journey.  The Dark Monster takes the form of our fear, negative thoughts, outside influence and opinions trying to tell you to do things or live life one way when your heart instead sings a different song of desires to be happy.  The concept of the Wanderer of Life vs. the Dark Monster is both an internal epic battle (mentally in our heads), and an external battle (such as experiences and outcomes with others and society).  Think of both cases like a superhero vs. an evil mastermind.  I told you I’m a nerd.
Each photography piece and title are paired with life lessons and emotion.  For example: 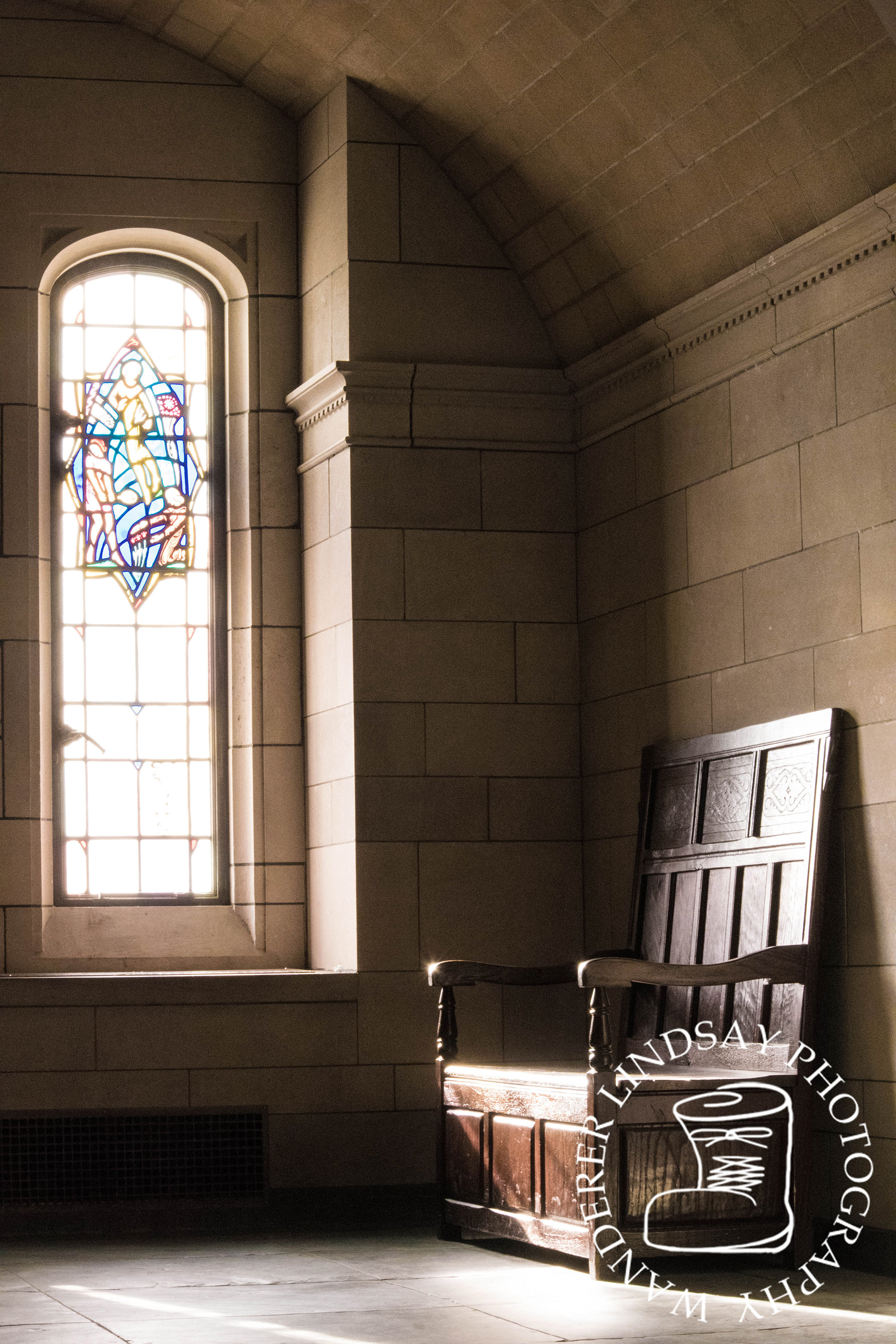 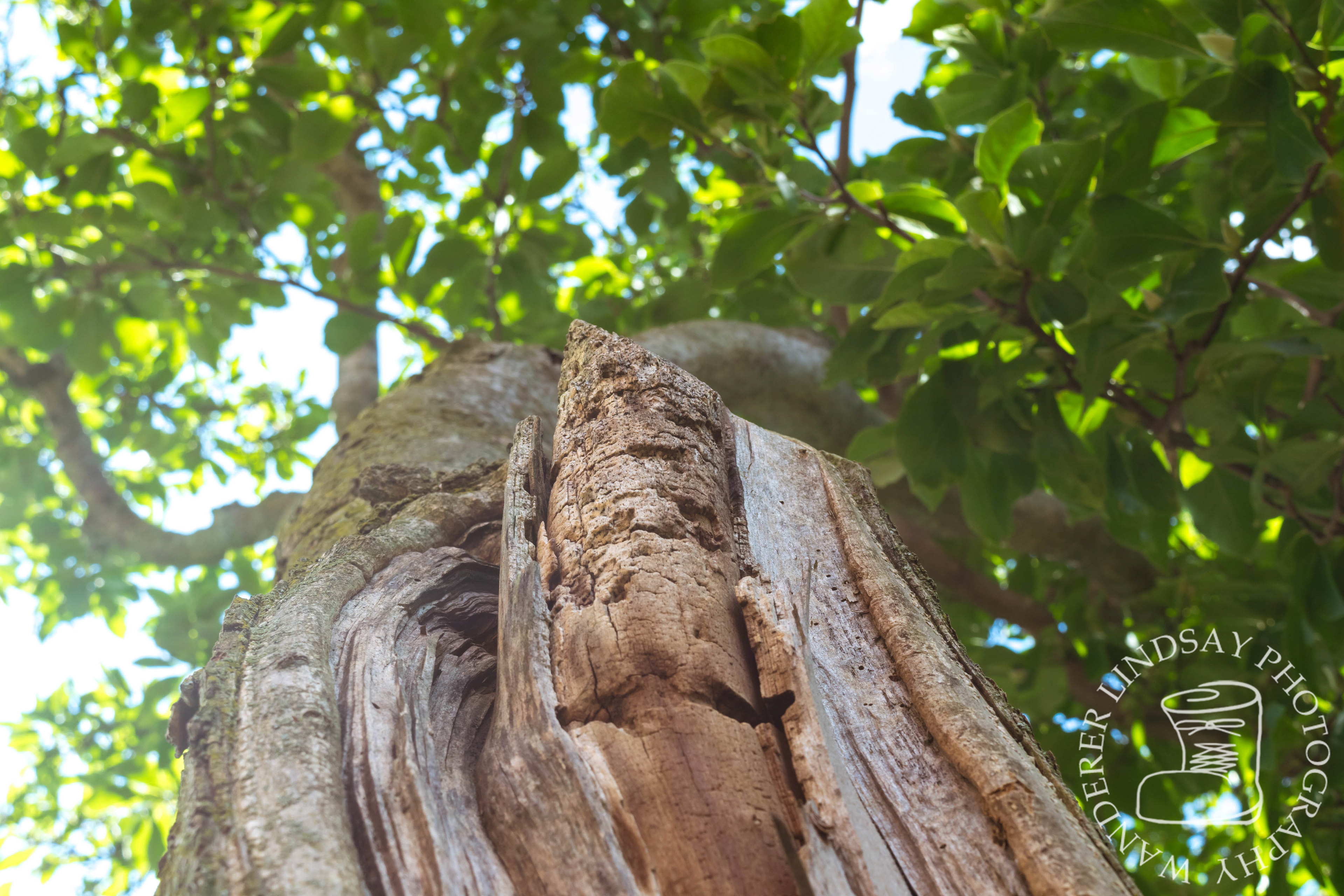 "The Light of Now"
The light shining through the stained glass window is an instant warmth of peace that just fills you up on the inside.  The image itself is inviting you to take a seat on the bench that is basking in the light, and imagining so, you feel even more of a peace of mind from that light in the present moment, the now.  This is exactly what happened to me when I sat on that bench after taking the photo.
"Room for Growth"
The point of view that is looking up at the tree to see the branches expand with leaves symbolizes how we always have the chance to improve ourselves.  Hence, Room for Growth.
The Products: Peace of Mind for All Occasions
My photography comes as greeting cards for little messages of inspiration and thoughts to someone going through something, magnets for that little and every day smile, and prints both big and small.  All of which are perfect for adding oomph to decorative spaces and tables, and even up to the greater walls of homes and offices.
The Story of the Wanderer Blog
Next is my blog full of articles that go further into detail about the prints and their messages, but written as narratives.  Thus the blog is titled as “The Story of the Wanderer.”  It’s the same concept of the Wanderer of Life vs. the Dark Monster, so think of it again as a superhero, but with stories of fighting against evil AND helping others in their own situations.  Heroes love to help others after all.
So far, in my short time as a business,
I have not only been showcased at several shows and events, but have even been displayed in places like a hospital and its cancer treatment center to shed positive light for some of the most dire outcomes.  To have my work be presented in such sensitive areas of a hospital was the most touching experience I have had as a photographer, and that is what I am to do for others: promote mindfulness, positivity, and life.
if there is anything to take away from the message behind what I do, it's this:​​​​​​​
1.  Don't Give Up
2.  There's More to Life than Society Leads On
3.  Start by Being Grateful
The third is the easiest activity you can start doing.  You can write 3-5 things you are grateful for per day and soon enough feel a big difference on your outlook of life (more on that later).​​​​​​​
Again: don't give up, there's more to life than society leads on, and be grateful.  And as a closing, I'd like to share with you the rest of the passage that Tolkien's quote comes from below:

Thank you, and happy trails my fellow wanderer.
Time to Change Your Frame of Mind
↑Back to Top

Insert copy here, which should vary depending on your region. Accept